Level switches, like level sensors, are mainly used to determine the filling level in tanks, silos or storage containers.

Compare with level sensors, which continuously measure the change in level, the level switch wholesale only indicates whether or not the level has reached a certain height. A detector therefore does not send a signal proportional to the level but a switching signal.

The main technologies used for level switches are:

Float level switch: a float follows the movement of the surface of a liquid and triggers a switch.

Rotary paddle level switch: a motor rotates a paddle, when the product reaches the paddle, the rotation is stopped and the detector switches.

Capacitive level switch: the detector forms an electrical capacitor with the tank, whose capacity changes when the level reaches the detector.

Conductive level switch: when a conductive liquid comes into contact with the electrodes of the switch, current is able to flow and trigger the switch.

Vibrating level switch: a rod or blades vibrate at their resonance frequency, when the product reaches them, the vibrations are damped and the detector switches.

Electro-optical level switch: the light coming from an infrared LED is reflected towards a receiver by a prism, when the level of liquid reaches the prism the beam is not reflected anymore but refracted in the liquid, which causes the detector to switch. 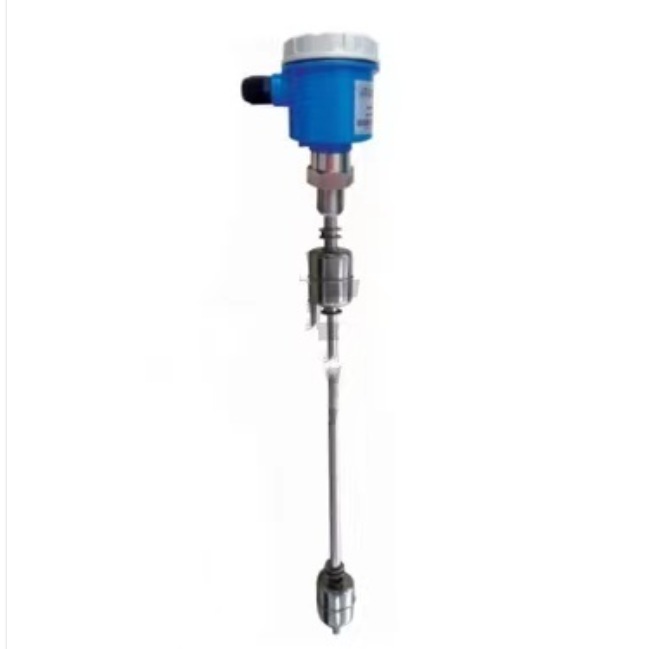 Float level switches are based on a simple principle: the combination of a float and a mechanical or magnetic switching device (reed switches). Naturally a float placed in a liquid tends to stay at the surface, this is the effect that is exploited here by detecting the displacement of a float when the liquid surface reaches its height in the tank.

There are 3 main types of float level switches:

The vertical type where the float slides along a vertical axis. This type of switch uses a magnetic switch (a reed switch) integrated into the axis, the float is equipped with a magnet and the detector changes state when the liquid makes the float rise to the level of the reed switch.

The “suspended” level switch type, which is simply made up of a float which hangs at the end of its cable. The switching device (usually mechanical) is placed inside the float. When the surface of the liquid reaches the float, the float rises and then tilts, triggering the change of state of the switching device. It is a simple but not very accurate technology, widely used in pumps as a dry run safety device.

The broken finger float type consists of a float fixed at the end of a horizontal articulated shaft. The rise of the float under the effect of the liquid causes a change in the inclination of the hinged axis which triggers the switching device of the detector.

Advantages of a float level switch:

Magnetic float level gauge are suitable for all liquids, provided that the switch materials are compatible with the liquid (plastic for acids, stainless steel for water and oils, etc.)

They are reliable, economical and easy to use

No calibration is required

Float level switches are unaffected by the nature of the liquid, its electrical conductivity, the pressure and temperature conditions in the tank, the presence of vapors, foam and boiling at the surface. They are however sensitive to the wave phenomenon.