What is the principal of magnetic level gauge?

What is the principal of magnetic level gauge?

Magnetic level gauges work on the principle of communicating vessels, therefore the level in the measuring chamber will be the same as the level in the vessel. The measuring chamber is fitted with a float, which has a magnet inside. The float with magnet will float on the medium and the magnet in the float will turn the flaps of the indicating rail.

The float in the measuring tube is standard not pressurized and has no magnetic or mechanical guidance. This construction makes the float less dangerous than a float which is standard pressurized. When necessary Hadro can produce a pressurized float.

With the below mentioned process conditions it is possible to select a float which will float on the medium.

Each flap in the indicating rail is fitted with a permanent magnet which makes this level gauge unaffected by shocks, vibrations and high temperatures. Also moisture and / or an aggressive environment are no problem for this level gauge.

Because of the construction of the flaps, one side white and on the other red / orange it is possible to see the level over a greater distance or in darker places.

With the available “Pointers” it is possible to set the visual limits on the indicating rail on every level you require.

When the magnetic level gauge is fitted with magnetic switches it is possible to get a signal. With more switches you can make a pump control (pump on / off) and / or create a high / low alarm. Beside or instead of level switches a reed chain transmitter can be mounted, this reed chain has an standard output signal of 4-20 mA.

Measurement is unaffected by pressure, vacuum, temperature, foam and viscosity

Back lighting is unnecessary

All the magnetic level gauges are fitted with a float. This float is standard in stainless steel, but the float is also available in Titanium or Hastelloy. The float must have enough buoyancy and the magnet must be fitted at the right position inside the float. So it is always important to select a float which is suitable for the process conditions.

In order to select the correct float the following process conditions are necessary. 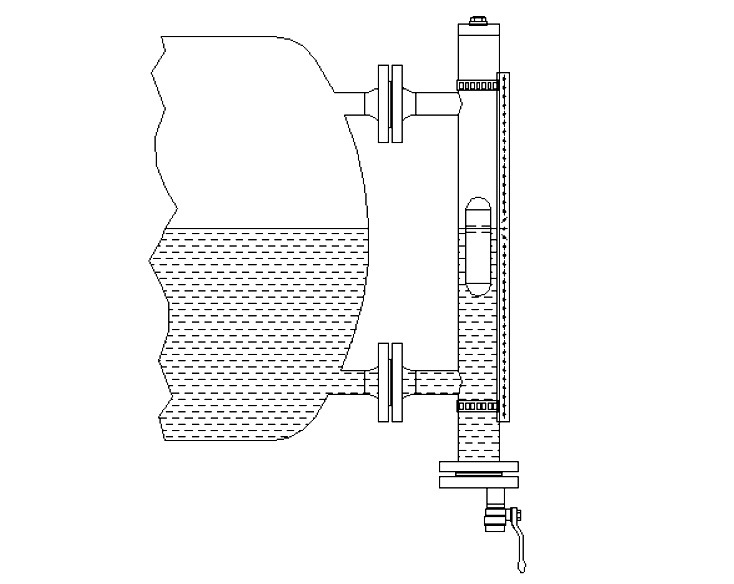 The lowest density, for which we can supply a float is 380 kg/m3 but this is depending on the before mentioned process conditions.

The float inside a magnetic level gauge can be fitted with a torriodal (360°) magnet or a magnetic bar. All our floats are fitted standard with a torriodal magnet, because a float with a magnetic bar can loose there guidance/ indication rail by rapid movement inside the level gauge. As a result the magnetic level gauge will not work properly for a while. Torriodal magnets are not affected by rapid movements of the float and can move freely inside the level gauge. This is also why you can place a level switch at all the sides you want.

When you mount a magnetic switch on the level gauge it is possible to get a signal. With more switches you can make a pump control (pump on / off) and / or obtain a high / low alarm. We can supply general purpose switches, switches for hazardous areas, or switches suitable for marine applications.